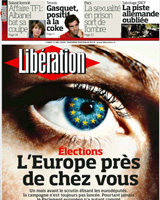 Founded in 1973 under the aegis of Jean-Paul Sartre, Libération has consistently cultivated an impertinent, left-wing image. Following a period of financial vicissitude, 40% of its capital was bought by Édouard de Rothschild in 2005, triggering the departure of several famous journalists, notably Florence Aubenas, the foreign correspondent held hostage in Iraq for several months in 2005; film critic Antoine de Baecque and writer Jean Hatzfeld.Liberation.fr embodies the bi-media concept: print edition content is updated several times daily and combined with visual and audio content. Launched up in 2007,Libélabo experiments with sound and visual effects on the margins of the news.