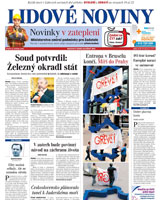 Founded in 1893, Lidové noviny has boasted prestigious contributors such Karel and Josef Čapek, and Eduard Bass. Banned during World War II and under the communist regime, it resurfaced after the Velvet Revolution with the help of a group of Czech dissidents including Jiří Ruml and Jiří Dienstbier, democratic and independent credentials intact. With a strong international outlook, it is famous for being the first paper to caricature national figures. The Czech Republic’s second highest-selling daily, the People’s Paper, although increasingly mainstream, remains the journal of the intelligentsia. Like its sister paper the top-selling DNES, Lidové noviny belongs to the MAFRA media group.