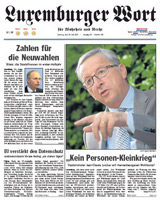 Founded in 1848, the "Luxembourg Word" is the principal daily newspaper in the Grand Duchy. The German language conservative paper is close to the Christian Social Party and focuses on local news but also covers European issues.

A French language edition, La Voix du Luxembourg, was published between 2001 and 2011. The newspaper's website continues to publish in French and also publishes English and Portuguese versions.