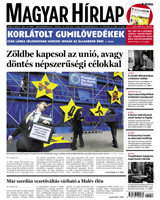 An official organ of communist power until 1989, for 15 years following the revolution "The Hungarian Gazette" adopted a left-wing editorial line and maintained close ties with liberal politicians. On 5 November 2004, the daily closed down before re-opening a few weeks later under the same editorial committee, which had orchestrated an in-house buyout.

Sold to a Hungarian businessman in 2005, it has since adopted a markedly right-wing line strongly associated with Viktor Orbán's party FIDESZ. On occasion, some of the newspaper's commentators have been criticised for voicing far right views.