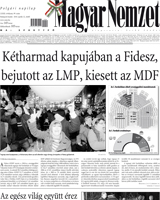 Founded in 1938 to combat the German influence, “The Hungarian Nation” maintained a semblance of independence during the Communist era. Predestined by tradition to become Hungary’s newspaper of record, Magyar Nemzet was at the centre of bitter struggles after the decline of Communism. After having been bought up by various local stakeholders, it is now the leading right-wing daily. It has adopted a militant tone in its editorials, a radical nationalism somewhat at odds with the paper’s refined intellectualism of yesteryear.