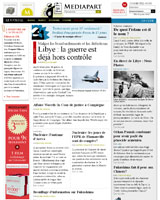 Mediapart is a French news website founded in 2008 by Edwy Plenel, a former managing editor of Le Monde. Highly critical of the actions of Nicolas Sarkozy, the site devotes a large part of its content investigation. It distinguished itself with its exposé of clandestine recordings (secret tapes recorded by Bettencourt's butler) in the Woerth-Bettancourt affair of 2009. Access to the contents of the site, which is free of advertising, is offered for a subscription fee. Mediapart also hosts participatory blogs on its “Le Club”.