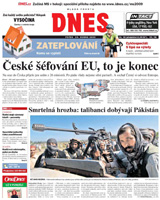 Mladá Fronta DNES, or DNES for short, is considered the Czech Republic’s most reliable daily. Founded in 1945 under the communist regime, its previous incarnation Youth Front was initially the mouthpiece of the party’s Socialist Youth wing. In November 1989, its journalists battled censorship and were the first to cover the Velvet Revolution on a national scale. They subsequently set up a newspaper independent of the state – Mladá Fronta DNES or Youth Front of Today. Politically centre-right, it belongs to the MAFRA group, itself owned by the German group RBVG, just like sister daily Lidové Noviny.