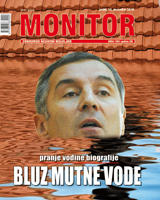 Founded in Sarajevo in October 1990, Monitor was the weekly reference for Yugoslav intellectuals initially fiercely opposed by the nationalist politics of Slobodan Milošević in particular, then, after the breakup of Yugoslavia, Montenegrin nationalist elites . After moving to Podgorica, the magazine regularly denounced Milo Dukanović's regime and criticised it for autocratic drift. Monitor has long been part-funded by the NGO Open Society, operated by tycoon George Soros, and is now controlled by the publishing group Montenegropublic, owned by magnate Misko Perović.