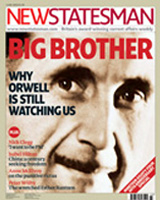 As of its founding in 1913, this political review earned a reputation for in depth analysis and fiery commentary. Although open to a wide range of opinions, the New Statesman, acting as a forum for the independent left, is considered the British intelligentsia’s journal of report. Initially austere, its layout is now spacious and colourful.

The website was overhauled in May 2009 and is visually now more in keeping with the print edition’s elegant appearance. Content is free, and for subscribers a PDF version is available.