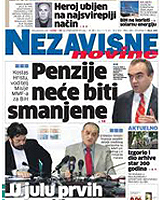 Founded in 1995, Nezavisne Novine ("The Independent Daily") is among the most widely read titles in the Bosnian-Serb entity, Republika Srpska, where it was one of the first local newspapers to publish articles on war crimes perpetrated by Serbs in Bosnia-Herzegovina during the 1992-1995 war, and to wage a campaign against local political corruption. As a result of its editorial line, in 1999 the newspaper’s co-founder, Zeljko Kopanja, was targeted by a bomb attack in which he lost both of his legs. A year later, Kopanja won the International Press Freedom Award.