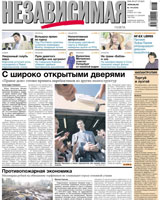 Launched under the direction of renowned Russian journalist Vitali Tretiakov in 1990, Nezavissimaïa Gazeta ("The Independent Newspaper") previously followed a pro-democracy but anti-liberal line, which made it an important left-wing voice. Since a takeover by the Berezovski Group, which also publishes Kommersant, it has become less austere, more accessible, and less vitriolic. The "NG" features an extensive foreign news section, which is widely read by the Moscow establishment.