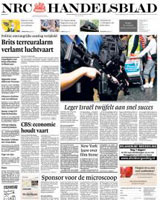 This national evening paper published in Amsterdam was the outcome of a merger in 1970 between the Nieuwe Rotterdamsche Courant (est. 1844) and Algemeen Handelsblad (est. 1828). NRC Handelsblad ranks fourth in circulation among Dutch dailies and is undeniably the paper of record among the nation’s intelligentsia. It is liberal by tradition, rigorous by choice, and well informed across the board. It is known for its in-depth reporting and the high calibre of its foreign correspondents.

2006 saw the birth of the daily NRC Next, a tabloid-format edition targeting 20–35-year-olds with more cursory coverage of breaking news. Whilst Next reprints some articles from NRC Handelsblad, it has its own editorial staff and boasts a circulation of over 80,000 copies.

NRC Handelsblad was the first Dutch national daily to launch an online edition, back in 1995. Besides in-depth reports on current events, the electronic version is rounded out with a mini-site called Nrc.tv featuring plenty of videos by the newspaper’s staffers. The site also hosts a number of blogs e.g. by the paper’s foreign correspondents and specialised journalists. The website also has an English-language section, NRC International, which aims to serve a worldwide audience and offers news about the Netherlands for those living and working in the country, as well as features and opinion articles aimed at anyone interested in a European take on current affairs. The site also translates some of the best features and articles of the paper edition on a wide range of topics. In December 2012, the newspaper moved its editorial headquarters from Rotterdam to Amsterdam.