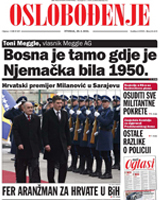 Oslobođenje (“Liberation”) is a Bosnian daily founded in 1943 by anti-Nazi partisans. Attached to preserving Bosnia-Herzegovina as a multi-ethnic state, its editors – a mixed team – continued to publish daily during the 1992-1995 war, despite the siege of Sarajevo and the deaths of five editors. The paper has won several awards including the Sakharov Prize in 1993. In 2006, the paper was acquired by two of the city's largest businesses, the Sarajevo Tobacco Factory and the Sarajevo Brewery.