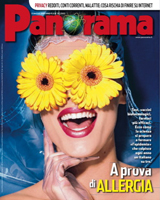 Despite a racy image (as legions of topless models on its front page bear witness to), this Italian weekly has a reputation for quality investigative journalism. Established in 1962 by the Milan-based publishers, Mondadori, and based on the Time magazine layout, it has been controlled by the tycoon and Prime Minister Berlusconi since 1990.

A combination of investigations, reports and gossip, Panorama, as its ownership suggests, is resolutely right-wing and unwavering in its support for Berlusconi.