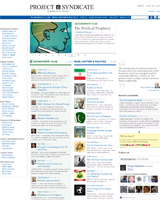 Project Syndicate is a syndication organisation that publishes analyses and commentaries written by academics, scientists, activists, economists, politicians or high profile figures from the world of business and culture, which aim to "generate debate centred on informed opinion". More than 430 press titles based in 150 countries subscribe to it and contribute to its financing. The articles, written in English, are available in seven languages; Arabic, Chinese, Czech, French, German, Spanish and Russian.