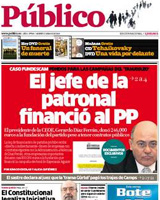 Launched in September 2007, the title is part of the media landscape and is the most important Spanish daily after El País. Its look was redesigned and its logo specially designed by the Catalan artist Miquel Barceló. "Público aims to capture a young readership accustomed to freesheets," explains founder Jaume Roures. Close to the socialists, the title is part of the Mediapro group, which also owns La Sexta, Spain's sixth largest television station. On February 25, 2012, due to financial problems, Público halted its print edition, although it continues to be published online.