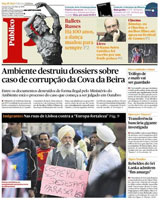 Founded in March 1990, Público promptly made a name for itself by dint of its originality and modernity in the lacklustre Portuguese press. Modelled on the leading European dailies, it provides quality coverage of global news. Like its compatriot counterparts, this paper of record puts out various weekly supplements, e.g. the arts magazine Pública. It has also broadened its distribution by publishing Y for younger readers. Público already had two local editions in Porto and Lisbon when it recently added two new versions for the central and Minho regions of the country. The website is actually a fully-fledged portal, offering hourly news updates and sundry services linked to the hardcopy edition. This site’s forte is its comprehensive coverage of topical Portuguese issues.