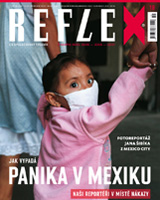 Fashionable weekly with an unconventional take on society, media and cultural issues, initially for a mainly youth audience. Famous for organising the annual photography festival on marijuana known as the Cannabis Cup. It has won the Czech publishers’ union Society Magazine of the Year award on two occasions - 2005 and 2006. Now owned by Swiss group Ringier SA, Reflex, under a new editorship, is increasingly geared towards a more general readership.