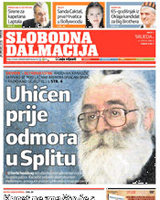 Founded in 1943 by Tito's partisans near Split, Slobodna Dalmacija (“Free Dalmatia”) is one of Croatia’s leading dailies. Independent, pluralistic and notably hostile to the central government under communism, it was taken over by associates of the nationalist government during the war (1993-1995), then nationalised towards the end of the 1990s to avoid bankruptcy, before being sold in 2005 to the Europapress publishing group, which also controls Jutarnji List.