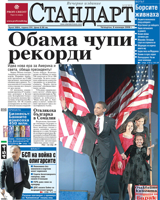 Launched in 1992, Standart initially targeted business and intellectual readers, before changing tack to become a tabloid shortly after the year 2000. Much of its success has been due to a wide-ranging editorial policy that has enabled it to publish articles on economics, politics, and technology, as well as culture and leisure issues. The newspaper's websiteoffers access to most of the content of the paper edition along with a version in English.