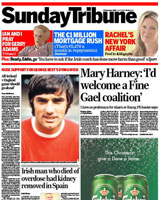 Launched initially as a tabloid in 1980, then becoming a broadsheet one year later, the Sunday Tribune only rose to prominence after it was taken over by legendary journalist Vincent Browne in 1983. Under his editorship, it became Ireland's most successful newspapers in the 1980’s. Of a centre-left tendency, The “Trib”, as it is popularly known, has seen its fortunes decline since the 1990’s and was saved from bankruptcy by the intervention of Tony O’Reilly’s Independent News and Media in 1993. Though its future has long been considered uncertain it has continued to survive in the extremely competitive Irish newspaper market. Thanks in part to its Northern desk editor, Suzanne Breen, it has maintained its reputation for quality investigative journalism by breaking news stories on dissident republican activity in Northern Ireland.

The website is free of access, but the contents of the print edition only upload at 6pm on day of publication.