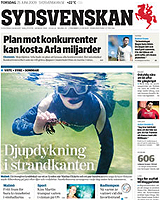 Founded in 1848, Sydsvenskan, (“The Southern Suede"), is the major liberal daily newspaper of southern Sweden. After changing format to become a tabloid in 2004, it dropped its original name, “Sydsvenska Dagbladet” and adopted the nickname by which it had always been known in Sweden: Sydsvenskan. It is part of the Bonnier Group, the largest newspaper company in Sweden. The editor of the newspaper’s political pages, Per T. Ohlsson, is famous for championing hard-line free-market policies in the country’s media.