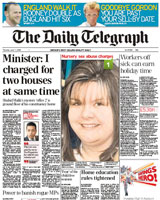 Founded in 1855, The Telegraph is “Middle England’s” leading conservative paper alongside The Daily Mail. Nicknamed the Torygraph for its close ties to the conservative party, its stance is pro-Atlantic Alliance and Eurosceptical, its style pugnacious and engagé. It is also the “quality” paper with the widest circulation in the UK.

Its daily diary is highly valued, particularly for the Court Circular, which reports the royal family’s day-to-day engagements. This broadsheet is owned by billionaire brothers David and Frederick Barclay.

The Telegraph was the first British daily to go online in 1994. Since 2006, its printed and Internet offices are one and the same. Traditional content is rounded out with a wide array of podcasts, videos and blogs.