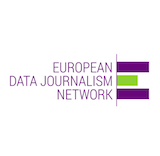 The European Data Journalism Network is a platform for data-driven news on European affairs in up to 12 languages created in 2017 by a consortium of media and data journalists from all over Europe, led by Osservatorio Balcani e Caucaso Transeuropa (Italy) and VoxEurop (France), in close partnership with three other outlets – Alternatives économiques (France), Spiegel Online (Germany), EUObserver (Belgium) – and three data-journalism agencies – Journalism++ (France); Local Focus (Netherlands) and Journalism Robotics (Sweden). Eight other media also participate in the consortium: BIQdata at Gazeta Wyborcza in Poland, Pod črto in Slovenia, Askanews and Internazionale in Italy, NRC Handelsblad in the Netherlands, El Confidential in Spain, H-Alter in Croatia and Ouest-France in France.