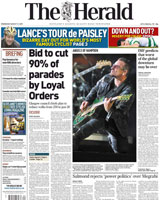 Founded in Glasgow in 1783, The Herald, which is currently the best selling Scottish quality daily, is characterized by its centre-left editorial line, and its long-standing rivalry with Edinburgh-based broadsheet, The Scotsman. In 1990s, The Herald was major supporter of the campaign for an autonomous scottish parliament.

Launched in 1995, The Herald website offers access to the editorials and the main political and economic articles of the paper version. It is also popular for the "The Herald Diary," an irreverent take on current affairs, and its interactive crosswords.