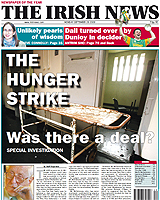 A staunch critic of terrorism and the IRA during the Troubles, the Irish News, Northern Ireland's main nationalist daily, voiced support for the Good Friday Peace Agreement in 1998 and has a policy of promoting reconciliation between the unionist and nationalist communities.

In 1995, it became the first Northern Irish newspaper to launch a website, before its main rival, the traditionally unionist Belfast Telegraph. Since 2011 it has been behind a paywall.