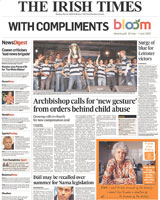 The awards regularly bestowed on journalists at The Irish Times bear out its status as the Emerald Isle’s daily newspaper of record. While jealously guarding its stylistic sobriety, it draws a wide readership, especially for its Saturday edition. Founded by Protestants in 1859, and now overseen by a board of trustees charged with safeguarding its political and religious independence, The Irish Times relies on a vast network of foreign correspondents and such prestigious columnists as writer/arts commentator Fintan O’Toole.

Its website, launched in 1994 for the Irish diaspora, was overhauled in June 2008. Now rather elegant, this on-line service offers free access to all daily articles and several editorial blogs. Its archives reproduce – for a fee – facsimiles of back issues from 1859 to 1996.