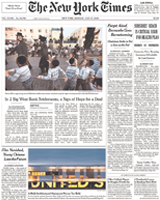 With 1,000 staff reporters, 26 foreign news bureaus, and over 80 Pulitzer Prizes, the New York Times is by far the largest American newspaper. Its slogan, "all the news that's fit to print", has been on the front page since 1897.

It is truly the newspaper of record in the US: broadcast news networks do not begin to consider a subject for national coverage unless the New York Times has printed an article about it. And it is the only daily whose Sunday paper (1.7 million copies) is distributed nationwide. The Sunday book-review supplement, the New York Times Book Review, is widely respected, and the New York Times Magazine is unequalled. In 1896, the Ochs-Sulzberger family bought the liberal daily, founded in 1851, and has owned it ever since.