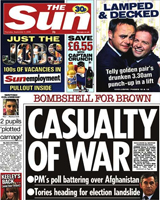 The flagship tabloid of the Rupert Murdoch giganticNews Corp, The Sun is the best selling newspaper in the UK. Sport, sex and scandals are the main focus in this daily with a reputation for sensationalist reporting.

Though it may appear frivolous, The Sun exerts a remarkable level of political power, and it is said that no party can hope to be elected without its approval. An ardent supporter of Margaret Thatcher in the 1980s, The Sun called on voters to back Labour during the Blair years. Now, in 2009, it has once again switched its allegiance to the Conservative party.

Like the paper edition, The Sun's website is simply presented and brash in tone. It offers free access to the main articles of the day along with the editorials, and pictures of the topless page-3 girls. It also operates a football betting service.