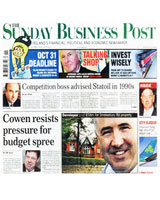 Published every Sunday, Ireland's national business weekly belongs to Post Publications Limited, which also owns the Irish Examiner. Its editorial team is one of the best respected in the Irish press, and several members of its staff have been honored with journalism awards. With a Comment & Analysis section focusing on international and national political issues including Northern Ireland — where the weekly has been noted for its Republican stance — the Post has succeeded in attracting a loyal readership, which includes economic and political decision makers.

Launched in 1998, the Sunday Business Post website offers access to most of the articles in the paper edition, as well as daily economic and political updates.