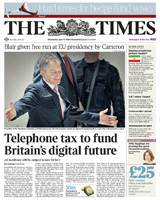 The doyen of British dailies (est. 1785). Despite its wide circulation, The Times, long revered the world over as the British establishment’s mouthpiece and newspaper of record, has seen its influence gradually wane after Rupert Murdoch’s News Corp bought it out in 1981. It has been seeking a more popular note ever since, with greater prominence given to sports and celebrities. With a view to attracting young readers, the paper adopted a compact format in 2004. Controversially, The Times website went behind a paywall in July 2010, at the same time as stopping access to The Times Literary Supplement, and reducing the flow of blogs and multimedia content.