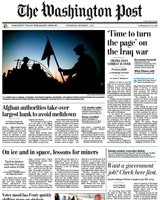 Generally regarded as one of the leading American dailies alongside its long-standing rival The New York Times, The Washington Post (founded 1877) is the US capital’s largest newspaper and also its oldest. Highly regarded for the sobriety and rigour of its general reporting and international coverage, The Post, as it's popularly called, has distinguished itself through its reporting on the workings of the White House, Congress, and other aspects of the U.S. government. Perhaps the most famous incident in its history was when, in the early 1970s, it uncovered the Watergate scandal which led to the resignation of President Richard Nixon. Formerly accused of having a left wing bias, nowadays the newspaper is considered to have a marked conservative slant. Its reputation, however, remains secure, not least by the number of Pulitzer prizes its staff have won - by 2010, a total of 47.