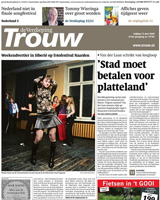 Trouw was founded by the Dutch Resistance in 1943. Its initial readership was drawn from the centre-left Protestant community, and it was not until 1998 that it appointed its first non-Calvinist editor-in-chief, Frits van Exter. Nonetheless, the Christian Press Foundation still makes sure the paper adheres to its religious identity, and it retains a say in editorial appointments. The paper is known for its outstanding coverage of education and public health issues. The fifth-most widely sold daily in The Netherlands, Trouw, in 2005, was the first to adopt a tabloid format.