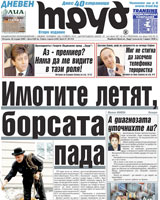 Founded in 1936, Trud or "Labour" is one of the oldest press titles in Bulgaria. Formerly a union newspaper, it became independent after the fall of communism and adopted its current tabloid tone and format. Bought in 1997 by the German press empire WAZ, which also owns its sister title 24 Tchassa, it is now the most widely read daily in the country. Trud has a penchant for man-bites-dog news items, but it is also respected for its investigative reports which often feature revelations about Bulgaria’s political elite.