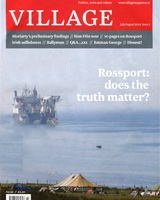 Village is one of those rare things, an Irish current affairs magazine, and one, to boot, resolutely to the left. Founded by legendary journalist and former editor of the Sunday Tribune, Vincent Browne, Village was launched in October 2004 and initially published on a weekly basis. Relaunched in 2008 under the new editorship of Michael Smith, it is now a bimonthly. Village, in its own words, promotes “the fair distribution of resources, welfare, respect and opportunity by the analysis and investigation of inequalities, unsustainable development and corruption, and the media’s role in their perpetuation.”