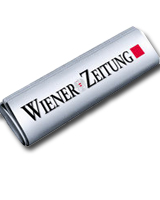 Founded as the Wiennerisches Diariumin 1703, the "Viennese Daily" is one of Europe's oldest newspapers. In 1812, it became the official newspaper of the Austrian state, and thereafter, it was acquired by the Austrian government, which owned the newspaper until it was privatised in 1998. Wiener Zeitung remains the organ for government announcements as well as for official corporate communications. The newspaper's websiteoffers free access to most of the content of the print edition.