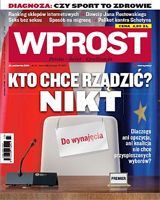 Having started out in 1982 as a regional weekly in Poznań, "To the point" went national in 1989. Noted for being the first Polish news magazine to attract readers with a modern format inspired by Time or Newsweek, Wprost defines its political stance as liberal-conservative, in favour of a free-market economy and Christian values. It also organises the "Personality of the year" award to honour individuals who have had a major impact on political, economic, and social life in Poland.

Its site, Wprost24, offers access to national and international news, blogs written by staff journalists, the index of the current issue, and pay-to-view access to the articles of the print edition.