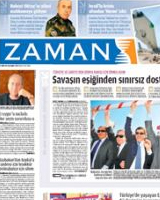 Founded in 1986, Zaman (“Time”) has since become the most popular paper in the Turkish press. While being avowedly conservative and Muslim, Zaman has opened its columns to editorialists known for their liberal ideas. This daily is part of a large media group comprising a press agency (Cihan), a weekly (Aksiyon), a daily in English ([Today’s Zaman](http://www.todayszaman.com/tz-web/)), a satellite TV channel (Samanyolu TV) and an FM radio broadcaster (Burç) as well as European and even Azeri publishers. All the paper-edition articles are viewable on its website.