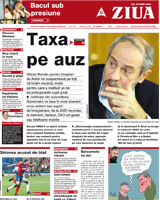 Reputed for its scoops, the Romanian tabloid, which closed in 2010, was often characterised by a preoccupation with spectacle in its news coverage.

While it was generally considered to be a mainstream newspaper, Ziua (“The Day”) often focused on unusual news stories which appealed to the Romanian middle-class appetite for sensation.

When Ziua ceased publication in 2010, some of the newspaper’s journalists launched the website Ziua Veche, while a second group created another website, www.ziuaonline.ro.