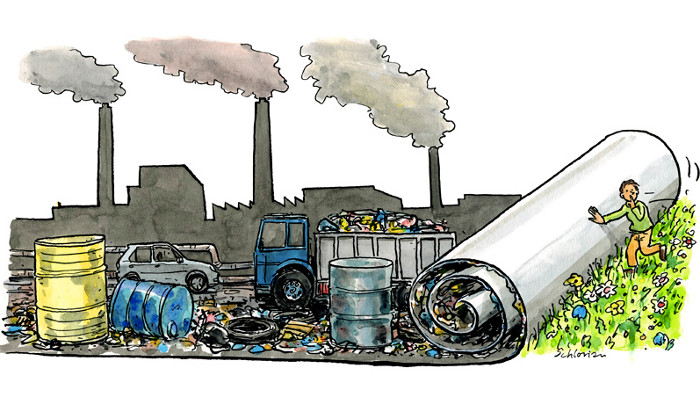 The European Green New Deal should not come without social justice

A genuine European Green New Deal must place social justice and ecological protection ahead of fiscal discipline and economic growth.

Following a remarkable breakthrough in the United States, the ‘Green New Deal’ is fast gaining momentum in the European Union. In her speech on July 16th in Strasbourg, the then candidate for president of the European Commission, Ursula von der Leyen, made it one of her priorities: ‘I will put forward a Green Deal for Europe in my first 100 days in office.’ Again on September 10th, as president-elect, she said: ‘I want the European Green Deal to become Europe’s hallmark. At the heart of it is our commitment to becoming the world’s first climate-neutral continent.’

For anyone interested in preserving the planet’s hospitality for humanity, this sounds like good news. But as people across the EU are starting to make it happen, it may be the right time for a word of caution.

To begin with, this is not the first time the EU has aimed for a Green New Deal. The last time was ten years ago when the great recession hit—and it failed miserably because the austerity embedded in the European treaties and institutions took over and delayed recovery by a number of years.

Nor is this the first time the EU has promised to reinvent its economic model. The last time was 20 years ago, when it trumpeted that it would ‘become the most competitive and dynamic knowledge-based economy in the world’ (in the words of the ‘Lisbon strategy’)—it also was a resounding failure, because of the same rigid rules governing European economies.

As these two reminders show, there will not be anything green nor new achieved in the coming months and years by the EU if its leaders do not get rid of the broken compasses of economic growth and fiscal discipline.

The EU is indeed still largely governed by flawed numbers, by which it is being gradually devoured. The leaders who decided, in the Maastricht treaty and its successors, that fiscal disciplines defined as percentages of budgets and gross domestic product should be the ultima ratio of the European project are responsible for a compound error—whose consequence has been the atrophy of European co-operation and the mutilation of prosperity for tens of millions of Europeans (just ask the Greeks).

Look carefully at von der Leyen’s appealing speech and you will see the old grey Europe creeping behind the green smokescreen: ‘If we want to succeed with this ambitious plan we need a strong economy. Because what we want to spend we need to earn first,’ she declared, only to add that ‘we need to work within the Stability and Growth Pact’.

And yet, it is obvious that a ‘green new deal’ that did not get rid of the current European fiscal rules would be neither new nor green—just the same tired old deal that is slowly choking the EU. For Europe not to waste another opportunity at making history, a closer look at the US New Deals, the original one and the green one, might be useful.

Franklin D Roosevelt’s New Deal, as president in the 1930s, certainly did restore growth in GDP, but that was never its intention (GDP was in fact invented in 1934 by Simon Kuznets to measure the magnitude of the great depression). So what was the purpose of the original New Deal? ‘In 1932 the issue was the restoration of American democracy,’ said FDR in 1936. In the same speech, he defined peace at its ultimate goal.

Peace also happens to be the reason why the European Union (and, before it, the European Economic Community) was founded and member states agreed to pool their sovereignty—not growth or fiscal discipline. Because of the twin crises of inequality and the biosphere, peace is now threatened within each European nation. The restoration (and consolidation) of democracy should be the first guiding principle of a European Green New Deal.

And what is the purpose of the 2019 US Green New Deal? The bill submitted to the House of Representatives last February—remarkable for its precision, analytical clarity and political lucidity—can be read as an attempt to go ‘beyond growth’ in the country of growth. The US recession which many fear today, the authors of the text tell us, is already here: it is a recession of well-being measured not by GDP loss but by plummeting health, declining education, corroded fairness and degraded ecosystems.

The US Green New Deal does not aim at increasing economic growth but at curbing the social inequality which is eating up the American fabric like acid. It identifies as the root cause of the US malaise ‘systemic inequalities’, both social and ecological. Accordingly, it intends to implement a ‘fair and just transition’, which will benefit as priority ‘frontline and vulnerable communities’.

This is also what the EU should aim for. Our inequality may seem less of an emergency, but this is only true of income and wealth and for some countries. Keep in mind that it was in Europe—not in the US—that extremist parties set in motion the democratic recession now spreading around the world. And we are far from prepared to bear the shocks of climate change: the summer heatwave in France alone killed 1,500 people, the third deadliest natural event in the country since 1900.

Our version of the Green New Deal should not be about investment for growth under fiscal discipline. It should be about sustainability for human wellbeing under a justice imperative. In other words, a strategy fit for the 21st century.