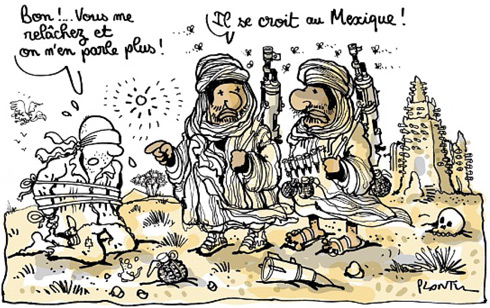 Okay! Let me go and we’ll say nothing more about this!
He thinks he’s in Mexico

On January 23, the Mexican Supreme Court ordered the release of Florence Cassez, a 38-year-old French woman who has served seven years of a 60-year prison sentence for for kidnapping, conspiracy and weapons possession.
The judges ruled that the fundamental rights of Cassez, who has always protested her innocence, had not been respected during her previous trial in Mexico. She arrived home in France the following day.
At the same time, Paris announced that it would dispatch Special Forces to Niger to protect uranium mines operated by the French group Areva. Five of the seven French hostages currently held by Islamist groups were captured from one of these sites in 2010.