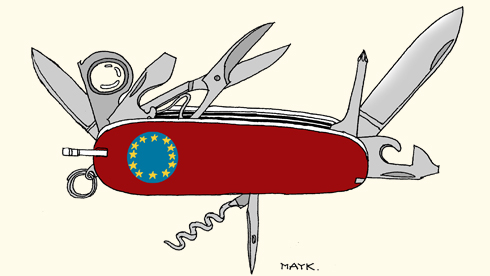 The next Europe is… Switzerland!

The EU can only gain legitimacy among its citizens and retain its role as a global economic and political player if it transforms itself into a real federal union, like its tiny neighbour, say some of Europe’s leading political figures gathered by the Berggruen think-tank.

History offers few notable examples of successful political federations. At its moment of federation, in the 1780s, the United States was a sparsely populated handful of young states with a common culture and common language, and so it does not provide many relevant lessons for Europe today. Switzerland’s experience, however, offers more, one of which is about slow gestation. “Federation needs time,” says the former Swiss diplomat Jakob Kellenberger. “It took centuries for people living in Swiss cantons to get to know each other, then a long period of confederation before the move toward full federation in 1848”.

The Swiss federation has worked, he notes, because the centre has been respectful of the autonomy of the cantons (which were never anxious to hand over their authority) and careful not to abuse its powers. All powers not specifically delegated to the federal government by the Swiss constitution, moreover, continue to be held by the cantons.

With decades of step-by-step integration already behind it and an accelerating world ahead, Europe must accomplish its shift to full political union in years and decades, not centuries, but this shift can nonetheless usefully follow much of the Swiss model. […] Like Switzerland, in other words, Europe needs a strong but limited central government that accommodates as much local diversity as possible.

Although a federal Europe must be open to all EU member states, forward movement toward it should not be blocked because some are not yet willing to go there, but nor should it be imposed from on high. The democratic public of each state will have to decide whether it is in its long-term interest to join the federation or opt out. It is an illusion to believe that a strong political union can be built on the weak allegiance that results from tweaking treaties. Its foundation must be a popular mandate.

You can unsubscribe at anytime *
Categories
EUMember StatesPolitics and democracySwitzerlandEuropean Union