Ideas The EU after the British and French elections 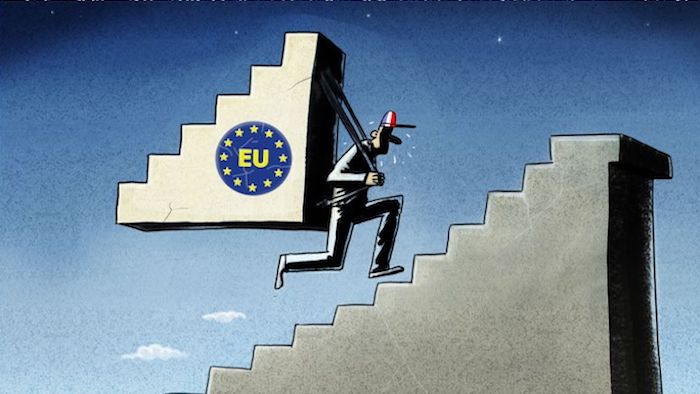 Ideas The EU after the British and French elections

Things are moving in Europe

The political crisis in Britain and the victory of pro-European Emmanuel Macron in France heralds a new dawn for Europe, and will only make it stronger.

The Channel has never seemed so wide. The popular mandate which Theresa May failed to consolidate on Thursday has been obtained by Emmanuel Macron on Sunday, and spectacularly so.

While May is on the decline, and will find it difficult to keep hold of power, Macron - record abstentions or not - is taking charge of things. Beyond the personal destinies of these leaders, this means two things.

The first is that while Great Britain has dug itself into a deep political crisis, France clearly wants to pull itself out from the quagmire and get things moving. The second, even more important, is that this reinvigoration of France gives it a weight in the EU that the UK has lost twice over: by voting for Brexit and then refusing, less than a year later, the “hard Brexit” threatened by May, and thus entering negotiations without any clear idea of what it wants to obtain or avoid.

In three days everything has changed in Europe. No longer will there be British politicians holding the brakes on economic and political integration. Those in other member states who hold similar attitudes will no longer be able to lean on London for help. Power relations have already changed in the Union, but, from Thursday, the sovereigntists and the new far-right will no longer be able to claim that Brexit is a good example for other states, since not even Britain itself seems certain of that.

Not only are the defenders of European unity strengthened, but this is happening at a time when the new French president’s main ambition is to put the Union back on track, and when Germany aims to adopt the French idea of European power - a political Union capable of playing an important role on the international stage.

Angela Merkel and Emmanuel Macron want to solidify this project. Their councillors and ministers have been tasked with developing common proposals. France and Germany are converging once again to move the European Union forward. Paris and Berlin may announce within a month the creation of a common fund to finance the first contours of European Defence.

When the French and the Germans are in agreement that things should get moving, the situation is certainly changing, but that is not all. There is Trump, whose unpredictability incites Europeans - all Europeans - to get their house in order. There is also the imperial nostalgia of Vladimir Putin, and the growing chaos in the middle east, a cause for Europeans to get a move on, especially when there’s no more assurance of American protection.