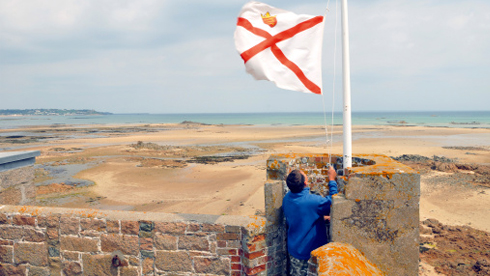 Treasure island caught in the searchlight

The EU has taken the fight against tax havens seriously, as shown by the May 22 leader summit to discuss tax evasion. But the clean-up should start at home, where territories such as the British Channel Island of Jersey prosper under the shelter of traditional political ambiguity.

The authorities of this quasi-independent territory are caught up in a controversy that has nothing to do with the past. They know that their economic system – based on very low or non-existent taxes – is arousing suspicions among governments and, above all, the citizens of other countries, who are wary of making ever-more sacrifices while others get a free pass.

“We’re not a casino, but a centre that collects investments to be injected somewhere else. That’s just what Europe needs. We’re part of the solution, not the problem", says the island's treasury minister, Philip Ozouf. "This government has always complied with and will continue to comply with international standards," Chief Minister Ian Gorst insisted this week.

Confronted with the arguments of the Government of Jersey and the financial lobby, the activists of the Tax Justice Network organisation rank the tiny island – which has less than 100,000 inhabitants but bank deposits exceeding €140bn – as the world’s seventh biggest tax haven on its list of “secrecy jurisdictions”.

"Despite Jersey not formally having bank secrecy like Switzerland or the Bahamas, secrecy is achieved in other ways: through funds, offshore companies and, since 2009, foundations", assures the NGO, which promotes transparency in international finance.

"The OECD does not include us on its list of tax havens," repeat the Jersey authorities, failing to convince critics. "On that list there are just two tiny islands in the Pacific: Nauru and Niue,” replies Mike Lewis, counselor to the Action Aid Organisation. “If this criterion were valid, there would be no tax havens in the world.”

“All the tax havens say the same thing,” adds writer and journalist Nicholas Shaxson. “They only pull out the OECD listings to try to show how clean they are."

But the Jersey’s problems are not growing solely under the weight of non-governmental organisations or mobilised citizens. Governments also appear determined to tackle the outflow of money that is escaping their tax inspectors.

"The message is simple. If you hide the money, we’ll be going after you", British Chancellor George Osborne said last week after London tracked down 100 big tax evaders in a joint effort with the US and Australia carried out in Singapore and the British Virgin Islands, the Cayman Islands, and the Cook Islands. This renewed momentum behind tax collection has encouraged Jersey to accept the exchange of banking information automatically with London and Washington.

Organisations including the Tax Justice Network are demanding that this measure be extended to all the countries of the EU, in order to start to have it taken seriously. Jersey’s response is that it will take that step when the 27 member states commit themselves to it as well.

Geoff Cook, CEO of Jersey Finance, representing the interests of a sector that accounts for 40 per cent of the economy, admits to some reservations about this new regulatory wave. "We do want to be good neighbours and to go along with what other governments decide. But there’s a risk that if the perception that Europeans are going to give out all the information on our customers spreads, our customers will choose to move their money to other territories. The exchange of information is fine if we all do it.”

Minister Ozouf is amicable with the journalist who has come to his country. But one question falters his smile. The British government itself estimates that an agreement to automatically exchange information with the three Crown dependencies would bring around one billion pounds (€1.185bn) into the public coffers. Is that not an admission from London that the island is, de facto, a tax haven? “That isn’t our figure and we don’t recognise it” responds the minister. “Even assuming that it were true, though, this amount is equivalent to what Jersey, Guernsey and Man would pay in in total over the next five years.”

Despite its new role as the older brother who obliges the little ones to follow the rules, the UK has until now taken a position so vague that its former colonies, overseas territories and Crown dependencies have been able to do as they please. London controls one of every five tax havens in the world, and many critics believe that it could have done a great deal more.

Nicholas Shaxson, in his bestselling Treasure Islands – which has become the Bible of the movement against tax havens – defines Jersey as a combination of "futuristic offshore financing and a medieval political system".

If the political structure of Jersey is very particular, its tax system is no less. The legislators dislike complications, much preferring round numbers instead: zero per cent tax for non-financial companies, 10 per cent for financial entities, and a straight 20 per cent on income, regardless of income level.

The stakes are high. Organisations like the Tax Justice Network have set out a three-fold objective: identifying which specific individuals, companies, funds or foundations are leaving their money in tax havens; agreeing on the exchange of information between all governments; and bringing in developing countries to help them benefit from these improvements.

Some steps have already been taken. The US, the UK and Australia have reached an agreement to scrutinise the funds of companies in half the tax havens of the world. At this week's summit, European leaders will try to design a common framework to combat tax evasion. If the giants of politics act decisively, little fish like Jersey will be forced to respond. But no one can guarantee that this will not turn out to be yet another missed opportunity.

European Parliament ratchets up the pressure

The European Parliament is expected to adopt a resolution on May 21 calling for member states to take measures against tax evasion.

The European Parliament wants to reduce by half the "tax gap," or the lost potential revenue from EU tax evasion, by 2020, explains Belgian daily De Standaard. The paper notes that tax fraud and tax evasion cost the European Union €1trn per year, or €2,000 per European citizen. Furthermore:

The priority of the 27 heads of state and government will be to broaden, to the European and even the global levels, the automatic exchange of data. They also hope to begin discussions as soon as possible with tax havens such as Switzerland, Liechtenstein, Monaco, Andorra and San Marino in order to convince them to adopt the same measures as the EU. In addition, they want to extend the conditions of the 2005 directive regulating savings income from interest to investment funds, foundations and trust funds. Austria and Luxembourg have yet to come around, but the pressure is so high that it is just a question of time, according to European sources.