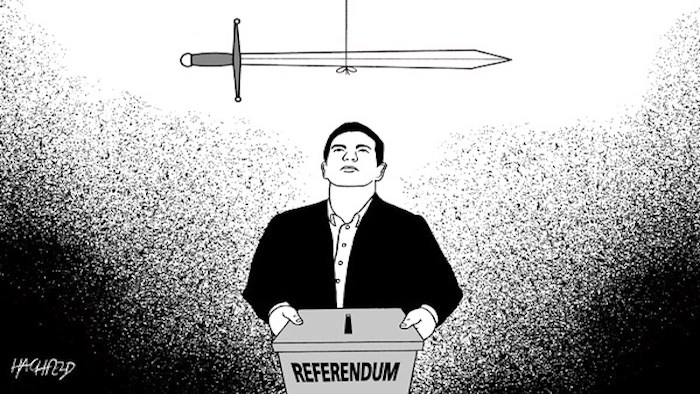 By calling for a referendum on 5 July on on the series of austerity measures demanded by Greece's creditors in exchange for a bail-out plan, Greek prime minister spread distrust among Eurozone partners and put his country on the brink of economic disaster.

Prime Minister Alexis Tsipras played his last chips and the country is already experiencing the results. If he has come to terms with the idea of Greece returning to the drachma then you can see some logic in his tactics – not for the country, not for its people but for him personally. If not, then he will have to pull a U-turn before it’s too late.

Tsipras will need to address the Greek people and admit that he played his last chips as he did because that’s what he thought they wanted and then explain the losses and gains of his strategy. He will have to muster up the courage to accept whatever proposal is presented to him as a solution of last resort. And this will take a lot of courage.

The more time that Tsipras allows to pass the more the country’s situation will deteriorate. Those who want to see Greece devolve into chaos will salute him. The beleaguered Greeks who believe in false promises and false bravado will also salute him. In the meantime, however, Greece will keep tumbling down the cliff, and fast.

Tsipras may still have a slight chance to stop this historical accelerator from stirring into action. This will be evident if he receives one more offer. It is not at all certain that something like this will happen.

In Brussels and other European capitals, officials have lost complete trust in him. He has used so many harsh words against everyone and spoken so negatively about what an agreement could entail that it appears he has burned all his bridges.

Even if he does receive a new proposal, who will trust him to take it upon himself to implement any agreement? On the other hand, if his aim is to exit the stage as a leftist hero, sorry, but he found a very expensive and destructive way to do it.

The Europeans ought to understand that Greece is more than Tsipras; and that the Greek people have not gone crazy all of a sudden. The fact that the electorate ended up voting a politician like Tsipras into power suggests that certain institutions or key players made some fatal mistakes.

Tsipras is aware of that, and he is exploiting people’s despair deeming that a large chunk is prepared to take anything – even a return to the drachma. The result is that we are now half way out of the euro. Should Tsipras receive, and then reject, a new proposal, Greece will be out.

If people vote “yes” on Sunday, there will be very little time to reverse this trend. If our partners fail to see this, the people will fall prey to destructive forces.