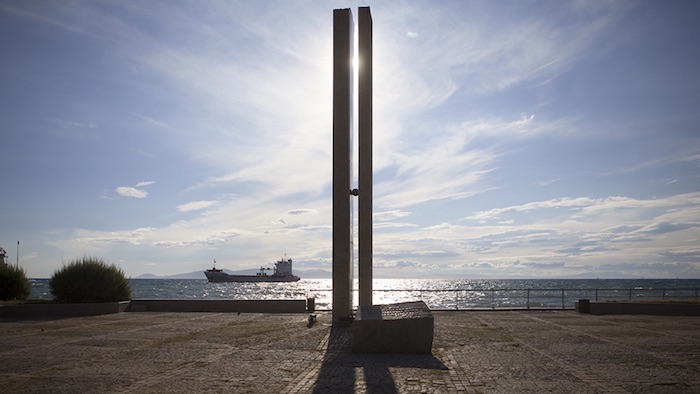 A few weeks into the EU-Turkey agreement on refugee resettlement, a report from Turkey’s Aegean coast shows that a growing number of migrants are choosing to stay.

With tears in his eyes, Mohammed tells how his younger brother was beheaded by ISIS because he wanted to quit the group he had joined a few months before. A 27-year old former Damascus University student, he works as a waiter in a bar facing Izmir’s Basmane railway station. Locals continue to call the area “Little Syria” although refugees can no longer to be seen either by the railway station, or in the nearby Culture Park, or in any of the adjacent streets. The only traces of the asylum seekers who flooded Izmir in the last few months are the occasional life jackets that are still displayed in the shops.

The deserted cafes and streets and the relative calm around the railway station and ferry terminal are the direct consequence of what everyone refers to as the EU-Turkey agreement: on 18 March 2016, EU leaders and Turkey agreed to end the irregular migration from Turkey to the EU and replace it instead with legal channels to resettle refugees in the EU. The aim is to replace disorganised, chaotic, irregular and dangerous migratory flows by organised, safe and legal pathways to Europe for those entitled to international protection in line with EU and international law.

According to the agreement migrants who have already reached the Greek islands are returned to Turkey from where their resettlement to European countries is supposed to be processed. The agreement took effect as of 20 March 2016, and 4 April 2016 was set as the target date for the start of returns of people arriving in Greece after 20 March and of the first resettlements.

One month later, the few occasional migrants who still arrive in Izmir are immediately directed toward a collecting point where their case is assessed, according to a staff worker (who does not wish to disclose his name) working for the Association for Solidarity with Asylum Seekers and Migrants (ASAM). The main objective of this association is to provide support and to meet the basic needs of the refugees and asylum seekers materially, but also by providing legal and social counselling.

He says Syrians receive different treatment from migrants of other nationalities. Non-Syrians are taken to a collection point also known as removal centre, where they wait for their case to be reviewed or to be sent back to their original country.

Syrians, on the other hand, are transferred to one of the 62 satellite cities where they are allowed to settle. There they have to register within 15 days of their arrival and after a thorough investigation of their background that may take up to several months, they are given a temporary protection (TP) ID card that entitles them to remain in Turkey. “We mostly want to make sure they have no criminal background or terrorist training,” explains a civil servant from the DGMM, the government agency responsible for the registration of asylum seekers and for the issuance of temporary protection ID cards.

Izmir’s DGMM office in Sokak street near the Kemeralti bazaar sees a regular stream of asylum seekers who either come to register or to get their documents once they are ready. On the day we visit, a family of five (who do not wish to be named or photographed) modestly show us their brand new IDs, a simple black and white laminated card with a blurred photo.

With these in hand, they can now legally live in one of the 62 satellite cities scattered in Turkey where they are provided with free education and health care but where they have to fend for themselves in terms of employment and accommodation.

The waiter Mohammed, who has been in Izmir for seven months, has given up the idea of resettling abroad. After his brother’s killing, he and two of his other siblings embarked on the dangerous trip to Europe via Turkey and after failed attempts to cross over to Greece decided to stay in Turkey. Now that his applications to study in universities in the US and in Canada have been rejected, he is resigned to wait for the end of the conflict in Syria, here in Turkey. “I am, we are all hopeful that it will end and that we can go back,” he says before hurrying off from our table to serve new customers.

Migrants in Turkey are increasingly choosing to stay here. In Çeşme, 100 km west of Izmir on the Aegean coast, just six miles from the Greek island of Chios, and once a hotspot for migrants destined for the EU, there are no migrants to be seen. The local police say that they have received orders to escort migrants to Izmir. The coast guards, traumatized by months of perilous sea rescues and of recovering bodies of migrants who did not make it to the shore, say that they have not been called for the past few weeks.

On the night of Lailat al-Mi’raj (the Muslim Ascension night) we meet three Syrian refugees. They walk around Çeşme with some Kurdish colleagues and share sweets as is the tradition on Lailat night. Like Muhammad, they have decided to stay in Turkey. They work as labourers in a brick factory and say it is easier for them to settle down here: “Unlike in Europe we are free to follow our religion here, our wives can wear the hijab and we feel comfortable socialising with Kurds,” they say.

Some Turks complain that Syrians, who accept to work for a third of normal salaries, are making life harder for them. There were even protests in Dikili over plans to build a refugee camp there. However, generally speaking, Turkish citizens have shown understanding and solidarity towards the refugees.

In Manisa, one of the 62 satellite cities where Syrians are welcome to settle, local people say that they are not bothered by the presence of Syrian refugees and that they are well integrated.

Back in Izmir, we meet Burhanettin Kansizoglu, Head of the IMHAD, a Muslim organization which promotes education and cultural activities. According to Kansizoglu, IMHAD has helped setting up five temporary education centres for Syrian migrants including one dedicated school in Konak that provides daily classes, transportation and food for up to 1800 students. But he estimates that as many Syrian children do not go to school due to lack of funds and space. IMHAD recruits teachers from the Syrian community and students who attend school follow Syria’s official curriculum. Apart from the teachers who receive a salary of 1000 TL (300 euros) a month, all the other IMHAD workers are volunteers.

Grade 9 student, 16 year old Beyza Karatas, is one of them. She says she and her classmates organize fundraising charity events and playgroup activities for Syrian children. Beyza attends an experimental, girls only, Muslim school in Izmir which in addition to the standard Turkish curriculum teaches Arabic and English. After school activities include kickboxing, Tae Kwon Do and archery. She and all her friends are ambitious and say they want to become lawyers, doctors and airline pilots. But their ultimate ambition, as they unanimously say, “is to save the world.”

This story has been published in partnership with The New Continent, a slow journalism, long term project and collaborative platform with the aim to document the stories of people living within or outside Europe’s Schengen borders. The project has been initiated by French documentary photographer Phil Le Gal.