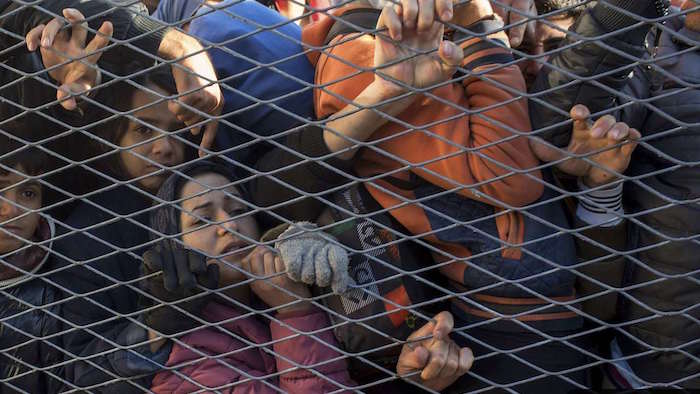 Children represent up to one quarter of the total number of migrants that have arrived in Europe over the past months. NGOs and charities say that monitoring and managing them is full of difficulties.

Migrants waiting to be registered at Opatovac camp (Croatia), 23 September 2015.

Opatonac refugee camp, Croatia. Crying continuously, a boy - no more than six years old - yells and shakes almost to the point of collapsing. Today, as I am writing this article, in a refugee camp in the Croatian town of Opatovac on the border with Serbia, someone has had the idea to separate children from their mothers during the identification process. But, disorientated, many are refusing to obey. They go to their mothers, held behind fences, in despair. Volunteers play with them and try to calm them down. But it is no easy task.

According to estimates by Unicef, whose staff operate on the ground, children represent around 25% of the almost 200,000 refugees who have been registered as entering Croatia since 16 September (when, after the closing of the border between Serbia and Hungary, migrants began passing through Croatia). There were people of all ages; nearly all of them showing some sign of trauma that will not easily fade. And not only that. “In addition to the psychological damage caused by their situation, they also have wounds on their feet from having walked so far, digestive tract infections because of the lack of hygienic conditions and pulmonary infections from having slept in the open,” says Valentina Otmatic, director of Unicef Croatia.

What these children have been through is so dramatic that some already look adult without acting so. This is the case with Bahir, a 14 year old Syrian teenager who, when we meet, is discussing with his brother about how to negotiate the obstacles between them and Germany. Soon after, however, the mask falls and he falls into the arms of a young Kurdish boy barely older than he is. They met on the journey here and, like many others, formed a group to protect themselves in case of danger. “What is going to happen to us?” Bahir asks.

No one answers. People shuffle around us, we see a row of army tents and heroic members of the local riot police unit. Among the crowds are a family of Afghans holding a little girl with startling red patches on her face. Also present is Afrah, a Syrian woman, who is holding her stomach and seems to suffer all the pain in the world. In reality, she got married before starting her journey and is now five months pregnant. Like many other pregnant woman among the refugees, she hopes to continue with her journey in spite of her condition.

Yes, it is extreme. Like the children who have travelled for kilometres and kilometres to reach Europe. Alone. “The speed with which this migration has occurred is giving rise to very unusual phenomena, like the large numbers of children travelling by themselves,” Otmatic says, to emphasise the urgent need to create a global system to locate these children and prevent them from falling into the hands of criminal networks.

Lydia Gall, the regional representative of Human Rights Watch (HRW) also believes that procedures like dividing families for identification purposes, when so many people are processed, is contributing to refugee children becoming separated from their families. “People are getting lost between bad processing, closed borders, overwhelmed civil servants and social workers,” Gall claims. So much so that, in Vienna train station, there is already a notice board where full of desperate messages from migrants who have lost family members during the journey.

However, these phenomena are not exclusive to children passing through the Balkan trail.

A similar spike in numbers is happening in the area between Spain and Morocco, and in Sicily, where these children arrive on board battered dinghies after a dangerous sea voyage. It is for this reason that, a few days ago, the Italian branch of Unicef announced that European authorities received 106,000 asylum requests from migrant children in the first six months of this year alone. And Save The Children, which also works in the arrival points used by these children, gave even more chilling figures: “In the first nine months of this year, 411,567 people cross the Mediterranean, of which 11,257 appeared to be children and 8,560 arrived without their families,” the organisation claimed.

“I was seven and a half years old when I escaped from Eritrea. I did it because they would have forced me to enlist in military service and this would have put an end to any hope of finding a better future,” said Tesfai, an Eritrean, to a Swiss newspaper. It took him eight years to reach Italy. “That is why I fled,” he says, now a teenager who now finds himself healthy and stable, having found a home in Switzerland.

Another account is from the charity El Puente Solidario, which was founded last September to deal with the many Sub-saharan children who find themselves in Tangiers and struggle to reach Europe because of the Spanish border fences. Aissatou Toubarry, a Liberian immigrant who founded the organisation, explains that a large number of these children have terrible stories behind them. Like, for example, being the children of political opponents in countries where this a mortal danger, or coming from polygamous families and having been chased away by their fathers. And, in Morocco, the authorities do not give any special treatment.

All this represents a challenge for the organisations and governments who register the presence of children arriving alone in Europe. “When we are told about child migrants, we consider a lot of things: are they in a group that has been looking after them, their age, and their health status. And, if possible, we try to make contact with their families in their country of origin. Then we decide if we are to repatriate them, put them in the hands of social services in the country of arrival, or allow them to continue their journey,” a voluntary worker told this newspaper. “But, well, the reality is that we are dealing with a highly complex reality, since it is impossible to know with certainty who is a child.”