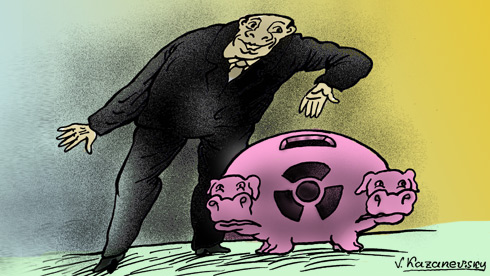 While Germany and France are trying to reduce their reliance on nuclear power, the UK has announced a deal to build its first new nuclear power plant in almost 20 years. A risky choice, but one for which the economic rationale is clear, writes the European press.

The controversial deal with French energy firms EDF and Areva and their Chinese partners CGN and CNNC to build a new nuclear power plant at Hinkley Point C in Somerset (south-west England) will create 25,000 much needed jobs, but comes at a high price: an electricity price guarantee that is twice the current wholesale price, concerns at the large scale Chinese investment in the project (30-40 per cent of the total amount), not to mention the environmental risks inherent with nuclear power.

“We may be paying over the odds for new nuclear power, but at least it provides the certainty that has been lacking for so long,” writes The Daily Telegraph, bemoaning the fact that “in order to attract state-owned French and Chinese firms, we have had to stuff their mouths with gold”. It continues –

How has a nation that once led the world in nuclear technology, one graced with bountiful resources in terms of coal, oil and gas, become dependent on France and China to keep its lights on? We are in this position because energy policy has, for decades, been a shambles. Even as our stock of power plants began to run down – a demise hastened by various British and European directives and targets – government made scandalously little provision for their replacement.

Meanwhile, an editorial in the Financial Times argues that the country is being forced to pursue the nuclear path because the 2008 Climate Change Act set overly optimistic emissions reduction targets. The daily writes –

Yet if new nuclear plants are needed to keep the lights on, that is because the UK has ruled out other options by adopting targets for emissions reduction that are among the toughest in the world. If policy makers believe these commitments are defensible even now that their cost has been laid bare, they should make their case. If not, they should reverse course. That this would be embarrassing is no excuse for saddling Britain with costs it cannot afford. [...] The country should now ask whether it can afford to race ahead with emissions reduction while others drag their feet.

For The Times, the agreement comes down to simple facts: “Britain needs nuclear power. The deal [...] is belated and welcome.” However, the newspaper’s editorial argues the government should have haggled harder, given EDF’s financial position. It writes –

The Government ought to have fought harder for better terms from EDF. Britain needs new nuclear capacity but the deal is likewise critical for the company after its overrun at a plant in [Flamanville] Normandy. Britain is obliged under the 2008 Climate Change Act to meet certain targets for reducing greenhouse gas emissions. Despite its considerable expense, nuclear power is the cheapest way of doing this. The price of renewables such as offshore wind is substantially greater.

In France, Mediapart notes that it is "the first time since the Fukushima disaster in the spring of 2011 that a European state has placed an order for a new nuclear plant." The website warns –

The agreement between London and EDF must still pass the scrutiny of the European Commission, which must determine whether or not state aid is involved. The British government is expected to file its application with Brussels this week.

For its part, La Croix considers London's decision "spectacular, [even if it is a ] decision that has gained sufficient consensus in the United Kingdom; [in France and Europe], though, it has amazed many." The daily noted that "nuclear power has became a major axis of cooperation" between London and Paris, “much like questions of defence and the big diplomatic issues". It also perceives a political choice on the part of the British government –

Great Britain is the ardent promoter of a European market without barriers. Having largely opened its doors to the French electricity champion, it can argue the cause of free trade even more vigorously.

In Germany, where the Fukushima disaster has lent speed to the country’s exit from nuclear power, Die Welt understands the decision of the British. The new plant "will be part of the new generation, producing energy in a safe manner by using less uranium than the earlier ones". In addition, the newspaper explains,

The British have fewer options [than the Germans]. Almost half of Britain’s energy production is based on natural gas, but British North Sea gas is running out quickly. A return to coal is excluded because of the lofty ambitions to protect the climate. And an energy shift that relies on the charity of subsidies according to the German model is no longer an example for the British to copy [...] Building new power plants could [even] be profitable.

The British decision is no victory for the nuclear business but a definitive admission of its failure, because the argument that nuclear power is not costly has been swept away by this deal once and for all: not only does the British government vouch for a large chunk of the investment into the new Hinkley Point reactor, but it also guarantees a fixed price of almost 11 [euro] cents per kWh to operators who provide the electricity – which is more than German consumers today pay for energy from large solar plants and wind farms.