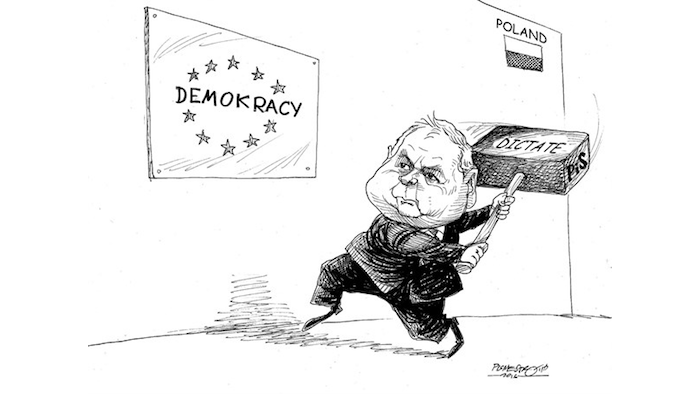 A week after the US president Donald Trump’s visit to Warsaw, the ruling conservative PiS party is poised to radically reform Poland’s Supreme Court in a way that would undermine even more its control over the government.

The notion of a Budapest-Warsaw express train used to explain mechanisms of democratic transition, in which the same positive socio-political and economic trends were copied from one country to another.
A new bill on the Supreme Court, that has been passed last week in the Polish Parliament, along with a law on the National Judiciary Council - a constitutional body guaranteeing autonomy of all judges, goes the same road but in the negative direction. If signed by the President of Poland Andrzej Duda the laws will stop the current term of the panel of judges including the President of the court who happens to be very vocal in her criticism of recent reforms of the judiciary system in Poland. This, in turn, would embolden the government to introduce even more systemic changes without the democratic legitimacy (lack of the constitutional majority in the Parliament) and based solely on the political will and autocratic ambition of Jarosław Kaczyński.
This looks like a template from Hungary. In order to remove the President of Hungarian Supreme Court Andras Baka who was critical of government’s purge in the judiciary system, Fides extinguished his mandate along with several other changes included in the new Fundamental Law in 2011. The case Baka vs Hungary was brought to the ECtHR in Strasbourg which ruled 3 years later that changes were unlawful and violated the applicant’s rights to access the court.
Also, the Court reiterated that Mr. Baka had a duty as President to express his opinion on legislative reforms affecting the judiciary. Hungary requested that the case is considered further by the Grand Chamber of the ECtHR but in June 2016 the courts upheld its verdict.
So it took 5 years to have a legally binding ruling against Hungary’s unlawful action. During that time new personnel has already settled in and it was impossible to enforce replacement without damage to the legal order in the country.
Kaczyński seems to follow exactly the footsteps of Orban in making sure he expels a powerful and authoritative critic before he can move further. This may include: confirming purge in public administration, diplomatic core, and judiciary (that took place in Hungary), changes in electoral law limiting the role of opposition and making sure elections are confirmed by the newly appointed President of the Constitutional Court and ultimately limiting options of appealing by parties that lost their cases in lower instances of the Polish court system.
The only difference is that he does not have a constitutional majority and tries to enforce an act that is clearly in violation of the Fundamental Law (article 183.3 gives a 6-year term to the President of the Supreme Court, no exceptions).
But in fact, if his political will triumphs over the Constitution he can double the trick of Orban by introducing several other policies irreversible unless stopped quickly.
The only remaining procedural obstacle to this scenario is the signature of President of Poland, who has three options according to the constitution: to sign the law within 21 days, ask the Constitutional Court for opinion or veto the law. Veto can be overthrown only by 2/3 majority in the Parliament that PiS does not have. At this moment only the veto could save Poland from a disastrous scenario that may involve legal paralysis in the country but also de facto suspending Poland’s rights as a full member of the EU.
President Duda, known until now mostly for signing nearly all proposed legislation, has expressed strong demands to modify the law. He asked for changes guaranteeing his position in the political in the Fundamental Law backed by a threat that he would not sign any of the legislation pieces. In addition, he expressed critical remarks regarding legislative mistakes in the wording and procedure of adopting of the law by the Parliament. On 24 July, Duda said he will veto the law.

Meanwhile, street protests that began a week ago only grew in strength all across country during a dormant period of summer holidays. Each night protesters gather in front of the Presidential office and in front of courts in Poland demanding presidential veto and expressing support for the rule of law. It is significant that protesters are predominantly young, often families in their 20s and 30s - while protesters over previous two years were often veterans of 1980s Solidarity movement. In this age group 82 per cent declare themselves as opponents of government - much above 53 per cent of general population with the same opinion, according to a recent IBRiS poll.
As we already pointed out in an article for Foreign Policy, univocal support from US President after his visit to Poland has only encouraged this government to make a move against the European political culture and the foundations of the parliamentary democracy. Today, Poland is ready to follow Hungary footsteps and go even further in rejecting European order in full. Such developments, experienced previously in the EU’s neighbourhoods, are potentially contagious as any revolutionary moment known in history. If not stopped, they may become a pattern for many other countries on the continent and jeopardise the EU.