Notebook Europeans and the coronavirus crisis 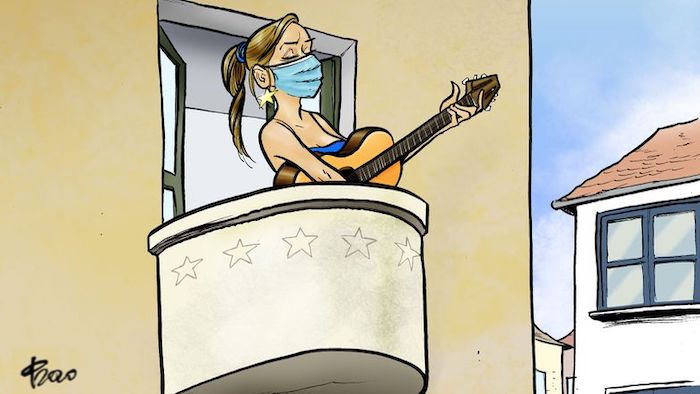 Notebook Europeans and the coronavirus crisis

Voices from the confinement

We asked our readers to tell us how they live through the COVID-19 epidemic, their experience of this crisis, what it tells us about Europe in the broadest sense, and what they hope for its future. The contributions are presented from the most recent to the oldest. You want to share yours? Write to us, and make your voice heard!

What is it that makes this small geographical extremity, wedged between the North Atlantic and the Mediterranean, so unique that it became a major political reality for centuries and is still a major political reality today? Political will. The emergence of Europe as a power is not dictated by the laws of geography. It is first and foremost a political, intellectual, spiritual and cultural construction. This will and this ambition have had their ups and downs but they have gone through extreme crises. Are they threatened today by the upheavals and tensions of the world that are knocking at our door?

Sure they are. The development of the coronavirus, which came from China, will probably amplify the resurgence of nationalism, the refusal to open borders, the desire for de-globalisation. The friendly foreigner becomes before our eyes a threatening stranger who seems to carry a total threat: military, economic, cultural and now medical.

Although we are one people, the current crisis may well sound the death knell for a unified world view. In the vast geopolitical recomposition taking place before our eyes, we can bet that, for a few decades at least, globalisation will turn into regionalisation, and that coherent and natural geographical groupings will go back to business as usual and possibly reform. They will replace the links forged by economic exchanges, colonial histories and cultural proximities. Brexit can also be interpreted as the British desire to remain global, as opposed to a Europe that will favour continentality.

The partial de-globalisation that we are about to witness will bring Europeans closer to one another and enable them to understand that they form a single nation.

The indifference of the privileged

My concern is divided between relatives living in the north of Italy, my brother living in London, and the prospects of my city, Messina, which along with the rest of the province, does not reach a hundred beds in intensive care. The episode that has been holding the city in suspense for a week now concerns some groups that in late March went skiing in the northern regions of Italy. After returning home, they continued to lead their lives without worrying about spreading the contagion.

Beyond any moral judgment on the behavior of these people, including many doctors and other members of the city’s bourgeoisie, the reflection that comes to mind concerns the tenacity, even unconsciousness, with which many people until very recently refused to believe that the situation was really serious and that it was possible to have to take on behaviors different from those we have always had. They were so accustomed to live in a wealthy society that they did not believe that it could happen to have to live in a state of emergency even here, and were not able to give up even one of the possibilities offered by that welfare.

I wonder, then, if the story of the wealthy skiers of Messina does not reflect in small measure the indifference of the privileged Europeans with regards to those emergencies that in recent years have flocked to their borders, determined to prevent those who were in difficulty to even disturb their well-being, to bring the war in their mental frame. The COVID-19 has undoubtedly created a crack in the frame, which may result in awareness and empathy.

What does this epidemic tell us about the European Union? Perhaps nothing that was not already clear to those who have observed its behaviour over the last…ten years. A political reality that holds the title of the Union and that in its treaties attaches primary value to the social needs of its citizens, should first of all lay the foundations for a unified healthcare system to protect them, perhaps headed by a Commissioner for Public Health ready to monitor and intervene in every situation.

Instead, we were faced with a terrible warning on what was happening in China, without the Commission drawing up a unified plan to deal with the epidemic. Some borders remained open and other borders were closed, air travel was banned or going on, different and contradictory scientific assessments were made, and no coordinating body in sight. Factories of medical devices that had emigrated to China, which nobody had bothered about, medicines packaged in India on which we now depend. And so on.

Does it take a lot to realise that the European Union has always been the result of economic agreements at the service of the continent’s big banks and multinationals, who couldn’t care less about public health? Does it take much to understand that here, if the foundations are not laid for a social Europe that redistributes wealth, Europe will break down (as is already happening) and we will return to old borders, customs duties, nationalistic competition, just as Trump wants to do for the USA?

Everyone at home: me because my company has reduced the number of people in the office and is preparing for a more extensive smart working, my wife who has closed her B&B, and the children. We’re good together and the anxiety doesn’t come from the risks of the coronavirus, which are scarce for us and which we may have faced twenty days ago when the children had a very high fever, with no other symptoms.

The anxiety comes from the media bombardment of useless news, of alarmist data that deliberately do not include an estimate of mild cases and asymptomatic, of news aimed only to scare to trigger the desired behavior. We have thus reduced the consumption of information to a minimum (zero TV).

We are both conforted by and fail to grasp the role of Europe: after being unjustifiably absent in the mediatc management of the crisis, it will have to do what it has not been able to do in recent years, now that the Stability Pact is over: work for true transnational justice and solidarity.

These texts have been translated with help of DeepL machine translation, as part of test. Feedback (and patience) is appreciated.